Cameron Shayne, founder of Budokon Yoga speaks why it appeals to men because men require discipline and physical effort to be inspired to practice something. 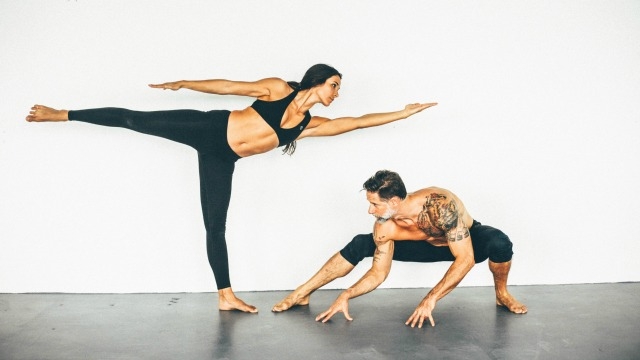 There has been a recent surge in the number of men practicing yoga, but you have already been practicing for over 30 years. How and why did you first become interested in yoga?

CS: I found martial arts at 12 years old so my foundation for the study of movement and mind was already in place when I was introduced to yoga. For me it was simply a variation of what I was already taught to do both mentally and physically. I was not disturbed by the qualities that often distract men, especially the marked feminine tones.

Modern yoga’s biggest challenge in regard to appealing to men is that it has transitioned from being overtly masculine to overtly feminine. If you are a man coming to yoga for the first time you really have to focus on the work, and not the package in which it’s delivered, or you may not relate to it immediately.

What is Budokon Yoga and what led you to develop it?

CS: BDK Yoga is physically a combination of martial arts, calisthenics, asana, and animal locomotion. I developed it because contemporary postural yoga doesn’t demand nor produce the kind of strength a human being is capable of. Postural yoga’s primary and original purpose was to aid in the comfort of seated meditation, and has since developed into a health and wellness practice for the average person. It however has never been, and most doubtful ever will be a system that develops athletes. For this reason I developed BDK Yoga for people who want to explore greater physical possibilities.

Yoga studios are often female-dominated, so why do you think Budokon Yoga appeals to men?

CS: BDK Yoga appeals to men because men require discipline and physical effort to be inspired to practice something. They need an environment where they feel challenged to excel which is not something that the typical postural yoga practice offers. This is one of the reasons only 20% of the yoga population is male, when it once was 100%.

Who can do Budokon Yoga? Do you have to have a yoga and/or martial arts background?

CS: Anyone can learn BDK Yoga, but it is engineered for people who like to move and push their physical boundaries to their limits. That is more often men, but I see that changing as women are more and more socially encouraged to be strong.

What are the health benefits of Budokon Yoga?

If men want to try yoga, but Budokon Yoga doesn’t fit, are there other styles you would recommend?

CS: Power yoga and ashtanga are the most physically demanding popular culture styles that can be found in most any city.

What other sports does yoga complement for those looking to cross train and maybe incorporate yoga with running, weight training, soccer etc?

CS: Postural yoga complements any physical endeavor. But don’t look for it to create an athlete out of you. That is not its intent. It will support soft tissue health, injury prevention and recovery.

Anything else you would say to guys wanting to give it a try but who are still feeling skeptical?!

CS: Do a few privates with a teacher first to get a feel for the physical and mental work. This will accelerate your learning process and results…. It will not give you everything physically, but it will get you on the right path towards what is possible.